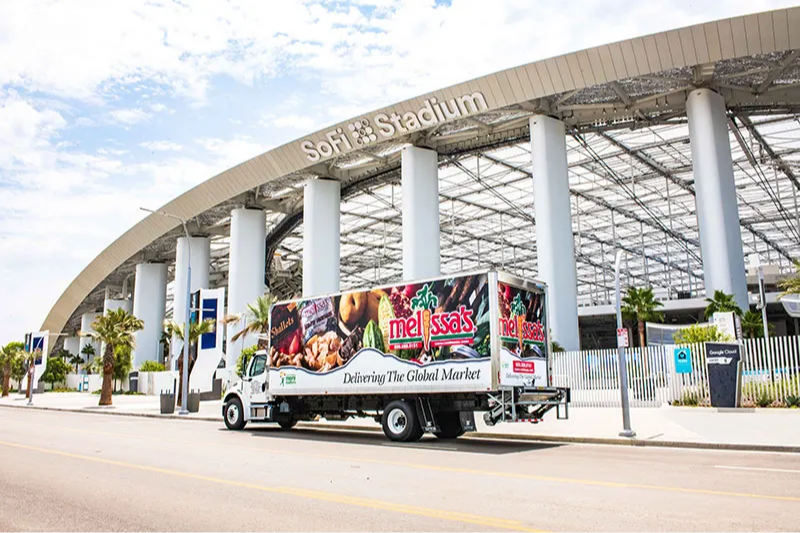 Known for the Finest Quality Fruits and Vegetables, Melissa’s will Play
a Key Role in SoFi Stadium’s Culinary Program

LOS ANGELES (October 28, 2021) – SoFi Stadium, home of the Los Angeles Rams and Los Angeles Chargers, partnered with Melissa’s / World Variety Produce, Inc., in a multi-year agreement that brings fresh fruits and vegetables to SoFi Stadium’s culinary program. The agreement also extends across American Airlines Plaza and YouTube Theater.
“Melissa’s is known for its high-quality fruits and vegetables. Through our partnership, the chefs at SoFi Stadium have access to exceptional ingredients, providing the building blocks to execute the culinary experience we created for our guests,” said Jason Gannon, managing director, SoFi Stadium and Hollywood Park.

Melissa’s offerings, which include fruits, vegetables, herbs, and fresh-pressed juices, will become a dynamic part of the culinary experience throughout the stadium. Melissa’s seasonal items will be incorporated into the club, suite and catering menus throughout the stadium and enhance the recipes created for the LA Eats and SoFi Stadium bar programs.

“Melissa's will provide SoFi Stadium with the freshest, most flavorful and unique produce finds throughout the seasons, featuring a curated selection of over 1,500 different varieties at any given time.” said Sharon Hernandez, co-owner of Melissa’s. “It’s essential to have a wide variety of high-quality ingredients to support SoFi Stadium’s diverse culinary offerings.”

As a key player at the intersection of food and sports, Melissa's has been elevating the food scene across the U.S. for four decades. Melissa's products and services are sought out by a wide range of culinary professionals, from Michelin-starred chefs to foodies and home chefs alike, seeking the very best in sustainability, seasonality, quality and flavor.

About Melissa's
Melissa's is the nation's leading specialty produce distributor, delivering the freshest ideas in produce from the global market to your local grocery stores, favorite restaurants, and go-to sports venues. From year-round products to seasonal favorites, Melissa's provides quality ingredients that you rely on. For more information about Melissa's / World Variety Produce, please visit www.melissas.com or follow us @melissasproduce on Instagram, Facebook and Twitter.

About SoFi Stadium
SoFi Stadium, the home of the Los Angeles Rams and Los Angeles Chargers, is located at Hollywood Park, a near 300-acre sports and entertainment destination being developed by Los Angeles Rams Owner/Chairman E. Stanley Kroenke in Inglewood, Calif. The 3.1 million square-foot SoFi Stadium is the largest stadium in the NFL, as well as the first indoor-outdoor stadium. It seats approximately 70,000, expandable up to 100,000, with more than 260 luxury suites and more than 13,000 premium seats. SoFi Stadium will host Super Bowl LVI in 2022, the College Football National Championship Game in 2023, and the Opening and Closing Ceremonies of the Olympic Games in 2028. Adjacent to the stadium and sitting under the same roof canopy is the 2.5-acre American Airlines Plaza and the 6,000-seat YouTube Theater. For more information about SoFi Stadium, visit www.SoFiStadium.com or @SoFiStadium on Instagram, Facebook, Twitter and YouTube.